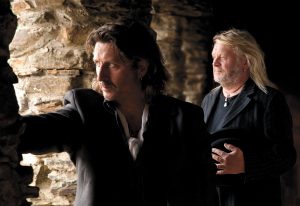 Another band for whom it’s a little too soon to return to to Saltaire after their 2017 appearance, Show of Hands also make the move over to York this spring.

On their “Where We’re Bound” tour Phil Beer & Steve Knightley will be playing as a duo. Despite the name of the tour, they will actually be casting their eyes backwards, focussing on material from their early albums, which featured familiar songs that have gone on to become Show of Hands classics, and a rich vein of forgotten gems.

Show of Hands weave story and melody to create spellbinding shows and this show celebrates the duo’s enduring impact on roots, folk and acoustic music..

Opening the show will be Steve and Phil’s special guest, fellow Devonian Geoff Lakeman, forefather of the prolific Lakeman tribe.

SHOW of HANDS TICKETS available from www.sivtickets.com
Or direct from SALTAIRELIVE (See tickets page for details)

Tickets will also be for sale on the evening of the concert on the Door.